The Year of the Snake: Tales from the Chinese Zodiac 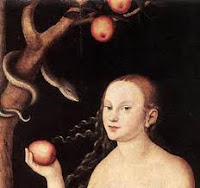 Back during the era of the Garden of Eden, snakes didn't have Reputation.com to manage their public profile. On that fateful day when Eve ate a simple apple, the street cred of snakes took a big hit and it has never really recovered since then.

From then on, every little snakelet has had to deal with bad PR that would tax the abilities of even the most well-funded Washington lobbyist to spin. 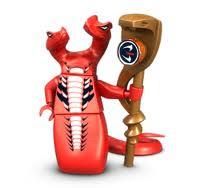 And were not even mentioning the negative Q ratings of G.I. Joe's nemesis Serpentor or of the Lego Ninjago's enemies the Serpentine (Hypnobrai, Fangpyre, Venomari, Constrictai, Anacondrai - boy that is a mouthful - who thinks of these names?!).

Well the new year is as good a time as any to reverse millenia of stereotyping. February 10, 2013 is the start of The Year of the Snake. Therefore, we are proud to introduce the 8th in our annual children's picture book series Tales from the Chinese Zodiac. 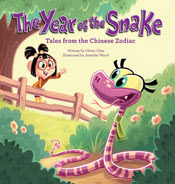 We personally cannot think of a better animal to carry the banner than our heroine Suzie. This gal has a lot of fire in her belly and won't take put downs lying down! Suzie and her bff Lily are soon joined at the hip. Together they set out to defrost the others' hoary preconceptions of snakes.

Jennifer Wood (www.artofjwood.com), the artist of 2012's uber popular The Year of the Dragon, has done a bang up job of making Suzie a contemporary 21st century reptile. No bashful skulking in shadows. No boring greens in Suzie's wardrobe, no sirree Bob. She is bright-eyed and bushy tailed. She's is ready to shake, rattle, and roll. She takes the world on by the horns.

Spoiler Alert: Suzie proves, once and for all, people born in The Year of the Snake have no reason to be ashamed. They are stellar characters and have great qualities. They can walk tall and proud and accomplish fantastic things!