Julie is back in Black! 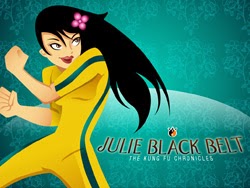 As we mentioned back in May, the sequel of Julie Black Belt was a long time coming...and has finally arrived!

Julie is a young girl who likes the martial arts dynamo Brandy Wu. So Julie has embarked on her own adventure...to learn how to practice kung-fu... and in more dimensions that she previously thought!

Now will Julie succeed in her quest to get The Belt of Fire?

Sampan review the original story The Kung Fu Chronicles: "As society progresses away from gender stereotypes, it is nice to see children’s literature doing the same. Growing up in the ’90s, I spent my childhood wondering why all the heroes were male and females characters who needed saving. Julie Black Belt is a shining example of how things have changed for the better."

In the intervening years since the publication of the first Julie Black Belt story, Kung Fu Panda and mixed martial arts (MMA) have pushed the popularity of martial arts in two directions: comedy on one hand and violence in the other.

However, we still wanted to chart our compass to the true north. We wanted to create a new chapter for families that was substantive. Julie should continue to plumb the depths of emotions that kids actually grapple with, and discover practical lessons that youngsters could also learn from their own experiences. 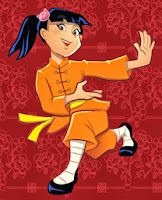 CM magazine praised the sequel:
"The character of Julie continues to give young girls a strong female protagonist with which to identify. This is further enhanced this time around with the introduction of Master Zhou. When Julie first learns that the Kung fu master is coming for a visit, she automatically assumes it will be a male teacher. It's a nice surprise to learn that the master who taught Sifu everything he knows is actually a woman. The character of Master Zhou serves to both further explore aspects of Kung fu and to provide young girls with yet another role model."

Artist Charlene Chua returns to bring Julie and a diverse cast of characters to life with vibrant colors and eye-catching motion.

Author Oliver Chin read it for the first time to kids at Miraloma Elementary School in San Francisco this week, and will autograph copies tomorrow (Friday, 1 pm) at the NCIBA annual book show at the South San Francisco convention center.

Get free coloring pages at www.julieblackbelt.com.
Posted by Immedium at 5:23 PM No comments:

New book: I'm the Scariest Thing in the Jungle! 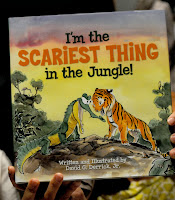 David Derrick (www.davederrick.com) is a veritable creative font. A story artist at DreamWorks Feature Animation by day, he has contributed to the movies Rise of the Guardians, How to Train Your Dragon, and Megamind. But at the same time, he has been imagining new stories chock full of animals that have the same bubbly enthusiasm and curiosity that kids have.

In 2010, Immedium published Dave's debut storybook Sid the Squid and the Search for the Perfect Job, which recently got a glowing endorsement from the Picture Book Review.

In 2010, we produced Dave's 2nd tale Animals Don't, So I Won't!, which is now sold at venues such at the Los Angeles Zoo and Hogle's Zoo in Utah.

This year, we complete the hat trick with Dave's newest romp I'm the Scariest Thing in the Jungle! In the wilds of India, the Bengal tiger is the king of the land but the saltwater crocodile is the master of the water. What will happen when the kids of these two fearsome beasts meet? Well, this will make the UFC look like kindergarten playtime...let's get ready to ruuuuuuumble!

Earlier in September, we displayed our sample copy at the annual convention of the Association of Zoos and Aquariums in Kansas City, MO. As expected, it was a big hit among these professional animal lovers and we took a bunch of pre-orders! Now you too can get your own copy - this time autographed by Dave himself with a unique animal sketch and free postcard!

Meet Dave as he reads at stores and museums throughout Southern California in October and Utah in November.
Posted by Immedium at 8:48 AM No comments: 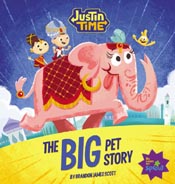 The second adventure in our Justin Time book series is now out!

The Big Pet Story has Justin and his pals traveling all the way to India!

Like most kids, Justin really wants a pet...and the bigger the better. In no time flat, he and his buddy Squidgy find themselves on the Asian subcontinent. There their friend Olive is a royal pet keeper...and Justin is a rajah - an Indian prince!

Monarchy has its benefits as Justin discovers he does have a pet - an elephant aptly named Tiny. Now everyone discovers that caring for a pet takes a little bit more effort than they had imagined!

These official adaptations of Justin Time episodes are available at bookstores nationwide, including Barnes & Noble.

The TV series is gaining fans across the globe, including Netflix. The licensing of the property will debut at the Licensing Expo in Las Vegas on June 18th.
Posted by Immedium at 10:13 AM No comments: 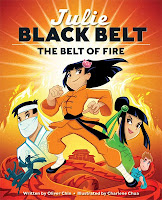 As you may know, May is America's annual month to commemorate the heritage and contributions of Asians and Pacific Islanders.

We at Immedium are happy to do so, since one of our publishing missions is to create more stories with Asian American themes and characters.

On tap is our upcoming September sequel in our series Julie Black Belt. The first story, The Kung Fu Chronicles launched in 2007 and readers have been asking for a follow up ever since. We are finally pleased to oblige them!

Julie is a girl that kids relate to - like any child, she wants to do well and learn new things but discovers that life is full of experiments, trials, and errors. Ultimately Julie understands that challenges require her to open her mind, revise her expectations, and grow with her body. 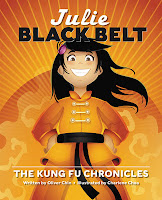 The notion of kung fu centers around practicing a discipline and honing one's skill. Though it normally is discussed in relation to sports and physical activity, kung fu really is about any endeavor one would want to improve in. Seeing themselves walking in Julie's shoes, youngsters understand what she is going through and, by extension, reframe their own experiences.

Now in The Belt of Fire, Julie is gunning to earn her next belt - orange! She continues to admire her movie idol Brandy Wu, a martial arts superstar. Julie starts watching Brandy Wu's latest adventure on DVD, but soon observes her heroine's success getting stifled by a mysterious stranger. But life starts to imitate art, as Julie discovers that a new kid in town has enrolled in her kung fu class. And her teacher Mr. Fong (aka "Sifu") may think he is better than her!